Okay, now that we’re caught up in why I’m revealing our summer pool transformation in Autumn, let’s do a little recap (full story here | quick story: 911 call for fire department and ruined appliances after downed lines, kids getting sick a lot). Our mission this year was to update our poolside lounge area to…be a poolside lounge area. We’ve lived here a few years now without real furniture out here because with little kids we weren’t ever sitting by the pool. It was just swimming in the afternoon then bath time. We enjoyed the pool in an assortment of handed down miscellaneous chairs, which served us plenty well. This year, we were ready to make it more inviting.

To see where we started check out these posts, or watch this quick video tour on Instagram:

Let’s do a run down of improvements since then.

The chaises were a huge decision covered in the moodboard post. They arrived in the spring and had minimal assembly. We did have to request some replacement parts since the front foot panel is vulnerable in shipping, and we had a few arrive with that piece damaged. If you recall we went with a budget pick for our chaises, which is always a gamble if things go wrong and arrive broken, because cheap so often means a lack of customer support.

I’m happy to report we had no issues whatsoever getting replacements. They were sent promptly and arrived fast. The only drawback was all of the packaging that built up in our garage.

Chaises were just the first step though. Items that need to be addressed in these pictures: bushes need trimming, umbrellas need to go, the inherited pool reel is broken, the umbrella stands need to be replaced, the pool caulk in the expansion joint needs to be re-done, and I’d love to replace the plastic expansion joints to match concrete but that will probably be next year…

…and the chaise cushions could already use a good wash – a self-imposed problem I exposed is shared by Hamptonites with chic poolscapes, and now us, PA suburbanites.

Here’s the scene after our first little pool party this summer for Memorial Day. The chaises were a hit and we pulled over extra chairs for people. A closer look at the lounge area shows you the umbrella situation. I bought what I thought were mosaic umbrella stands from target along with “black” cabana stripe umbrellas our first year here.

This is as black as they ever looked. They read a slate gray and I had to double check the packaging to make sure I didn’t actually get blue. The mosaic umbrella stands are just…not great. But they were 50 lbs each and did their job and we never bothered to return them even though they are basically a laminate faux mosaic, and the post shaft wasn’t proportioned quite right to hold the umbrellas straight.

They clash with the contemporary umbrellas both stylistically and in color. Also, we realized that having stationary pool loungers meant we needed umbrellas that could move with the sun. And that they were tripping hazards when positioned for actual shade.

Now You Can Stand Under my Umbrellas, Ellas, Ellas and Not Get Sunburned

You could also see though the umbrellas pretty clearly this year so I did some research on new ones. After realizing my umbrellas of choice would be about $1000 each from Frontgate, I dialed it back since our frames are in good shape (I try to upcycle where I can to minimize waste). I decided to check if replacement canopies are a thing in 2022. Spoiler alert: they are! And they’re anywhere from $20-$60 buckeroos. Excellent!

I bought some scotch guard to help protect the replacement umbrella canopies. Two coats were applied and dried very quickly, but I aired them out for a couple of hours before moving them.

Fun fact: crickets are inexplicably very drawn to scotch guard. Or, maybe there is a relatively simple explanation an entomologist could give you if they checked the ingredients list. It could also simply be enjoyable for them to jump on umbrella canopies; a high-style trampoline for crickets.

I wouldn’t know. Anyway, can’t say I didn’t warn you!

Here they are in action in the old umbrella stands shading our swan float and taking a cue from Fat Joe and leaning back. Even the umbrellas are relaxed in our lounge area.

And you can’t see through them!

The Pillows & Tables & a Peek at the Final Lounge Area

I mentioned in the moodboard post that I decided to get a fabric design I’ve been working on printed on pillows after searching high and low for pillows and not really loving anything for tying the lounge area together. I promise this wasn’t some devious plan for self-promotion, it really was on the fly.

I still consider this design a work in progress, but I’m happy with it as the accent I’m using right now. I have some tweaks that I know I want to make, and some more details I’d like to refine and add in before I’d consider this done. But the warm pinky-terracotta blossoms tie together the pool coping and the acacia chaises nicely.

The fabric is recycled polyester, making it suitable for outdoor use, and the material has a bit of a sheen to it in full sun, making it read much more pink. I’ll share more on stories on Instagram.

I put 20″ square pillows on the chairs by the fire table in the same pattern for cohesion since it’s all in the same line of sight, but I’d like to mix and match it eventually to make it a bit more interesting. I expect down the road we’ll get new chairs by the fire table, but we’re done spending money out here for now and hoping to get some inside projects done and address some exterior maintenance that has been delayed due to COVID.

Here’s a peek at the current set up before finishing adjusting the umbrellas – not reveal quality, but this has dragged on long enough! The tables are Cobyn accent stools from Frontgate. We only got two, anticipating having the chaises a little bit more spaced out, with two pairs together each with an umbrella. It turns out the shade coverage is much better with the chaises all in an evenly spaced row, so now we’re getting a third table to fill in the middle and have more resting places for odds and ends – three tables total between the four chaises.

I still have to edit the “final” images and share them with you, hopefully tomorrow but it may not happen until next week. I am in the process of setting up new fabrics with my printer that will really take the quality to the next level and be able to ramp up production, and have to take care of files for that this week.

Also an aside in case you’re not on the ‘gram – I found an amazing secondhand deal on William Morris Owl & Willow wallpaper – and it’s IMPECCABLE. Here’s a quick shot, and more details will be over on my stories too: 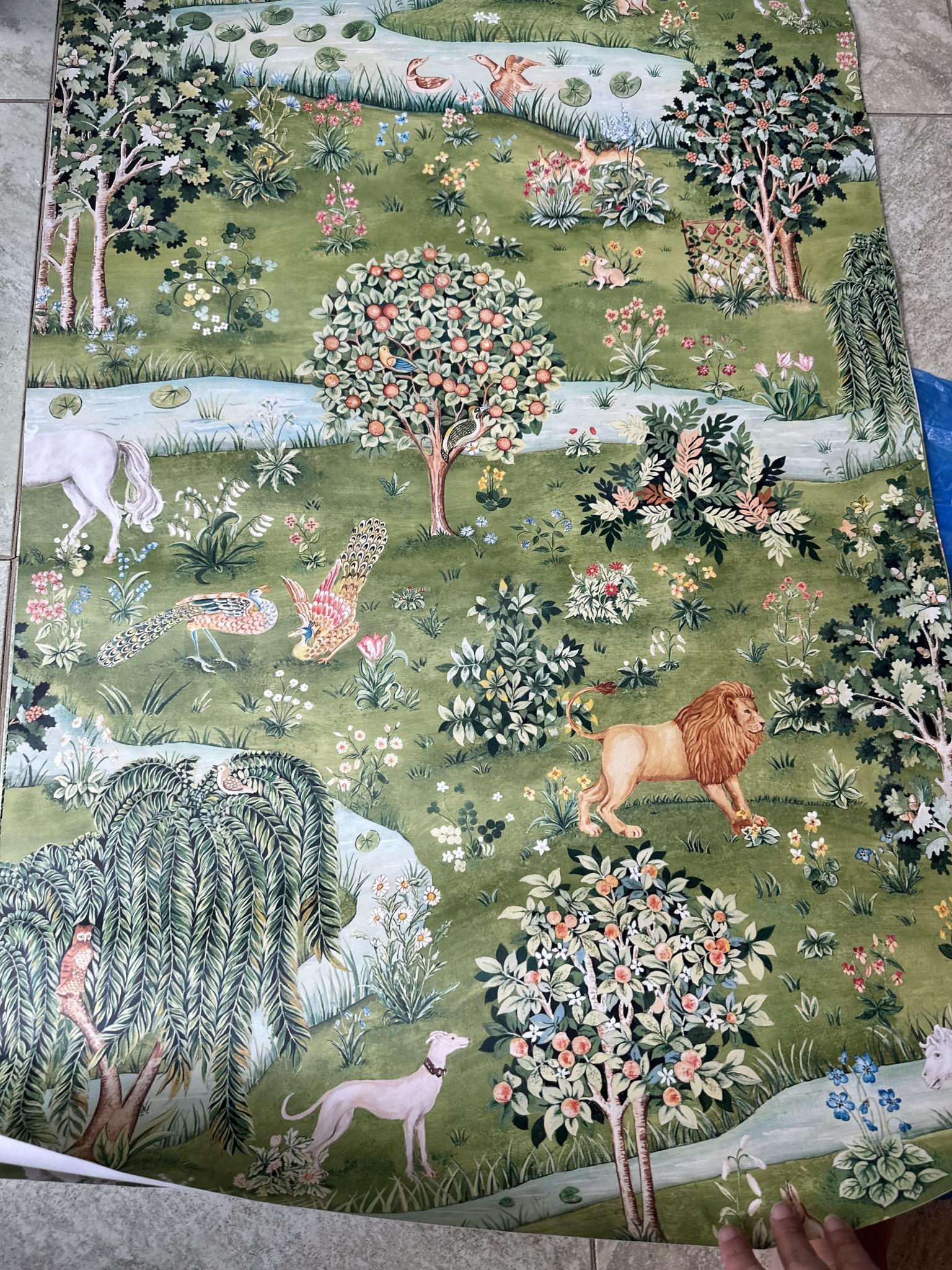 Week 6 One Room Challenge: Primary Suite Sconce Shades & the Calm Before the Storm

This site uses Akismet to reduce spam. Learn how your comment data is processed.

Thanks for visiting! I’m Maura, an enthusiast of layered interiors, decorating my cape cod revival home and learning as I go – in between parenting and designing fabrics.
Read more…

This Week’s Most Popular

Well-suited as both a standalone piece or backdrop for stronger accent prints, this interlocking pattern is a new classic neutral.